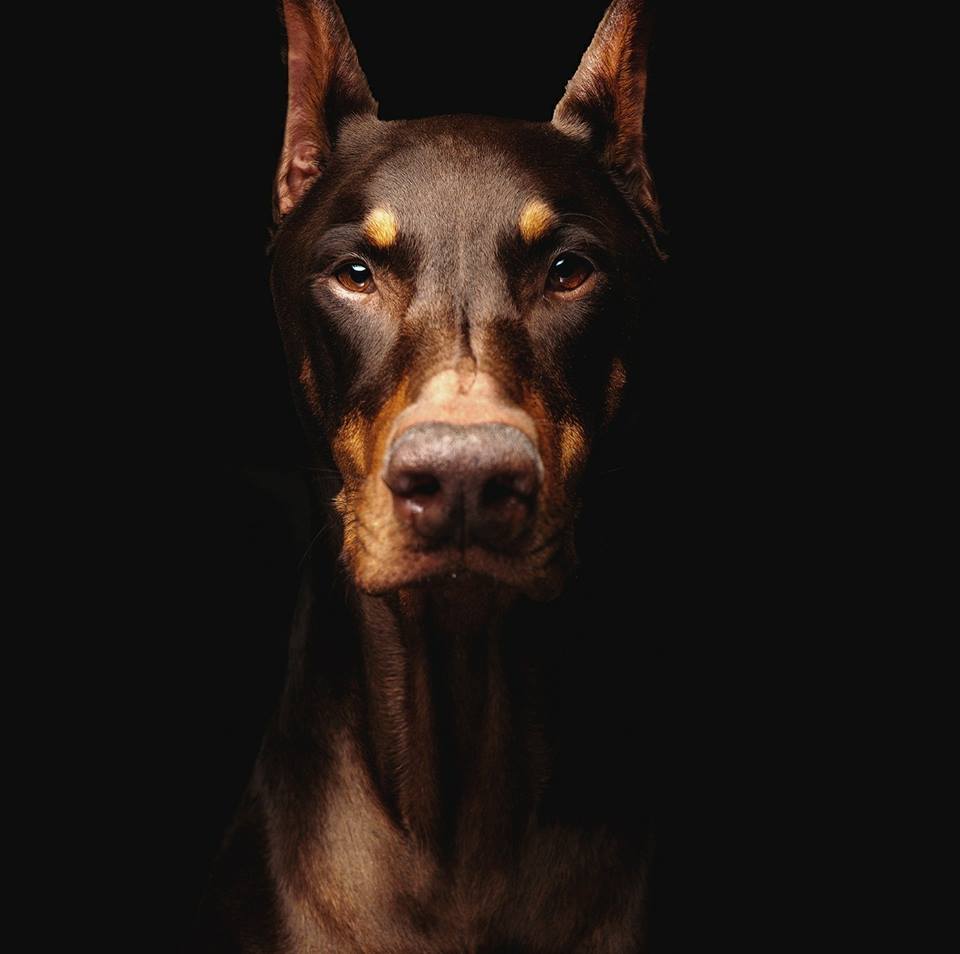 With its uncluttered look and symmetrical outline, the Doberman is uniquely a product of the 20th Century. Its short shiny coat, clipped ears and tail, superb structure and iron musculature, give the Doberman a trim appearance modern as tomorrow.

Outwardly simple, but inwardly complex, it is a mixture of many breeds, combining the fire and lightning reactions of the terrier with the power and intelligence of the guard and herding breeds. The Doberman was tailored for use in police and military work, and, to be a medium sized protector-companion in the home.

Originating in late 19th Century Germany of somewhat uncertain ancestry, its reputation for courage, loyalty and intelligence coupled with its aristocratic beauty, quickly made it popular in other lands, particularly the United States, where its growth had been fostered by careful selective breeding.

Dobermans, regardless of basic coat color, have a characteristic pattern of markings which ideally are a rust-red color. Its coat may be black, reddish brown, bluish gray or silvery beige. Its weight ranges from about 55 to 90 pounds and its height at the withers from 24 to 28 inches, males being larger than females.

The Doberman Pinscher derived its name from Louis Dobermann of Apolda, Thuringia, whose breeding experiments were reputedly involved in its early development. After his death in 1894, the Germans named the breed Dobermann-pinscher in his honor, but a half century later dropped the pinscher on the grounds that this German word for terrier was no longer appropriate. The British did the same thing a few years later. The Miniature Pinscher is not a miniature Doberman and the two breeds are not related.

There are no records, only speculation, as to the dogs which went into the creation of the original Doberman, but it is documented that crosses were made to two of the English breeds around the turn of the century, using the Black and Tan Manchester Terrier and the black English Greyhound, in order to improve the Doberman’s appearance. It is generally accepted as fact that the two German breeds, which played a major role in the Doberman’s ancestry were: the old German Shepherd, now extinct: and the German Pinscher – the ancestors of the Rottweiler and the Weimaraner.

The old German Shepherd contributed ruggedness, intelligence and physical and mental soundness, with the Pinscher adding the terrier fire and quick reaction time. The Weimaraner gave to the Doberman its hunting, retrieving and scenting capabilities, for the Weimar Pointer, as it was called, was an all purpose hunting dog. However, it was to the Rottweiler which the early Doberman strongly resembled, that the breed owes so much of its substance, bravery and reliable guarding ability.