Highlights as written by Mrs A J Goulette/Publicity Chairman: 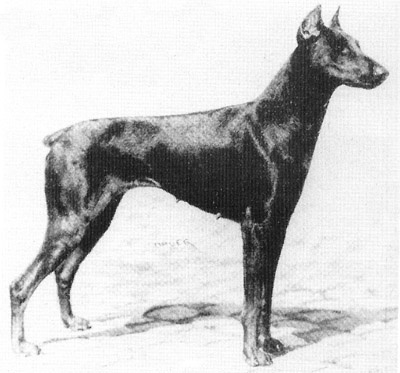 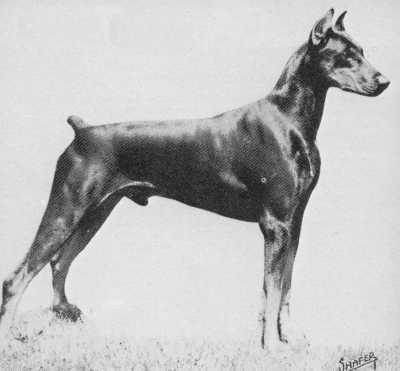 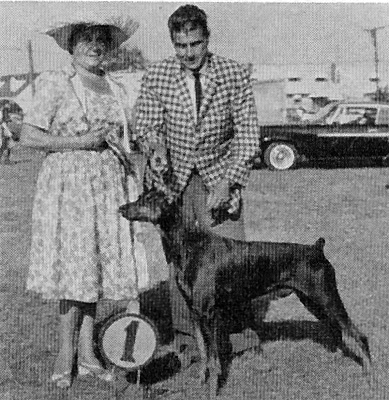 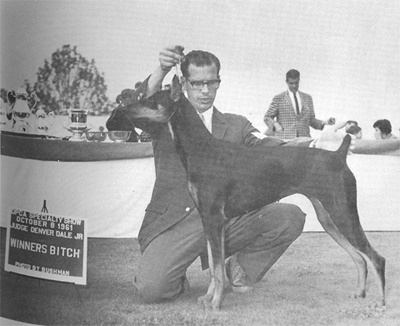 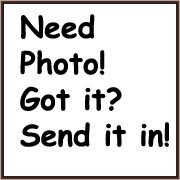 "Show Statistics--There was an entry of 41 in the Futurity, 17 dogs and 24 bitches, judged by Frank Haselman.
Roy Hatfield passed on 63 dogs, Theodore Nintzel on 65 bitches. Twenty-six champions were entered in the Specials Only class, 3 in Stud Dog and 7 in brood bitch and 3 in Veterans with Frank Haselman again in the judge's role. Obedience accounted for an entry of 23, with Carl Sine doing the honors. The first medallion for highest scoring dog in Obedience was awarded at this show. The total number of dogs was 176, with an entry of 232.
The medallion offered for Best of Breed which was placed on the floor in front of the Delegate Trophy during the picture taking was misplaced in the excitement and anyone having any information concerning its whereabouts please contact Henry Frampton, Box 1052, Miami, Fla
DPCA Winners--Last month we gave you a flash, so you did get the news that Henry and Theodosia Frampton's Ch Borong The Warlock CD topped the show for the first time that any Doberman has won Best of Breed at three DPCA Specialty events. Congratulations to his owners and breeders, and to Borong himself.
Best of Opposite Sex was Mr and Mrs Edgar L Snider's Ch Roark's Abigail von Pia, which finished her Championship just a few months ago and has since won two Best in Shows at All Breed events, and now the second higest honor at the National Specialty.
Best of Winners went to the dog, the Frampton's Borong The Warlock's Lancer CD, a black son of the Best of Breed winner and a homebed. His dam is Ch Faust's Siegerin von Sanmahr CD. Reserve to him was the Open red winner, Robert Swartwout's Dirina's Diablo Rouge, a Ch Dobe Acres Cinnamon son out of Ch Brown's Honore, bred by Nick Dirina.
In bitches the winner was the Open lack, Miss Maggie Hilliard's Betty of Marross, she by Westerholz Kurt x Gretel of Rhinegold, bred by Mary Ross and Florence Ainston. Reserve was the Open red winner, Mrs Mary McFadden's Brown's Bridget, a daughter of Ch Brown's Eric out of West Begins Dagmar, bred by Della Schultz.
Leonard Biegalski's Ch Phylsims Alexander The Great topped the Stud Dog class and Nellie Pickering and Myrtle Jones's Ch Regina Princess von Matildenau the Brood Bitch class.
Just two present in the Veterans' class, Barricade's Red Knight CD and Mr and Mrs Maureice Buttrick's Ch Jamboree of Skipp N Chuch, both six years old this past spring. Red Knight was the winner.
The Futurity--In the Futurity, Best 6-9 months Puppy was the bitch, Dr Stuart Evans' Jem's Emerald v Warlock, which also won it's class in conformation, and is a Borong daughter. Best 9-12, also a bitch, Dr Quentin Matthews' Kay Hill's Witch Kist, went on to Best Futurity Puppy. She is also by Borong.
Best of the Juniors was the dog, Mr and Mrs W B Rourk's Roark's Achilles v Pia and he went on to Grand Futurity Winner. Achilles is a litter brother to Ch Abigail.
In Obedience, Velma Janek's Rad's Friendly Jest of Summer was highest scoring dog with a score of 199.5 in Open B, also topping Utility with 198.5.
From the many reports received, the quality at the show was the highest seen in any Parent Club Specialty in a number of years." Dog News, December 1960