With its uncluttered look and symmetrical outline, the Doberman is uniquely a product of the 20th Century. Its short shiny coat, clipped ears and tail, superb structure and iron musculature, give the Doberman a trim appearance modern as tomorrow.

Outwardly simple, but inwardly complex, it is a mixture of many breeds, combining the fire and lightning reactions of the terrier with the power and intelligence of the guard and herding breeds. The Doberman was tailored for use in police and military work, and, to be a medium sized protector-companion in the home.

Originating in late 19th Century Germany of somewhat uncertain ancestry, its reputation for courage, loyalty and intelligence coupled with its aristocratic beauty, quickly made it popular in other lands, particularly the United States, where its growth had been fostered by careful selective breeding.

Dobermans, regardless of basic coat color, have a characteristic pattern of markings which ideally are a rust-red color. Its coat may be black, reddish brown, bluish gray or silvery beige. Its weight ranges from about 55 to 90 pounds and its height at the withers from 24 to 28 inches, males being larger than females.

The Doberman Pinscher derived its name from Louis Dobermann of Apolda, Thuringia, whose breeding experiments were reputedly involved in its early development. After his death in 1894, the Germans named the breed Dobermann-pinscher in his honor, but a half century later dropped the pinscher on the grounds that this German word for terrier was no longer appropriate. The British did the same thing a few years later. The Miniature Pinscher is not a miniature Doberman and the two breeds are not related.

There are no records, only speculation, as to the dogs which went into the creation of the original Doberman, but it is documented that crosses were made to two of the English breeds around the turn of the century, using the Black and Tan Manchester Terrier and the black English Greyhound, in order to improve the Doberman’s appearance. It is generally accepted as fact that the two German breeds, which played a major role in the Doberman’s ancestry were: the old German Shepherd, now extinct: and the German Pinscher – the ancestors of the Rottweiler and the Weimaraner.

The old German Shepherd contributed ruggedness, intelligence and physical and mental soundness, with the Pinscher adding the terrier fire and quick reaction time. The Weimaraner gave to the Doberman its hunting, retrieving and scenting capabilities, for the Weimar Pointer, as it was called, was an all purpose hunting dog. However, it was to the Rottweiler which the early Doberman strongly resembled, that the breed owes so much of its substance, bravery and reliable guarding ability.

How many of you know about the founder of our club? George Howard Earle III was born on December 5, 1890 in Pennsylvania. He grew up on a Montgomery County estate as the son of a wealthy family that traced its lineage back to the arrival of the Mayflower. According to Wikipedia :

“He received a degree from Harvard University and subsequently 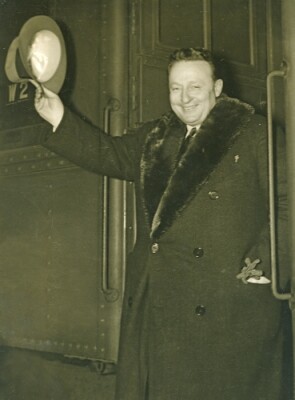 worked abroad in a family-owned sugar business. Upon US entry into World War I, he enlisted in the military. He earned the Navy Cross in 1918 after averting a fatal explosion when a munitions ship under his command caught fire. After the war, Earle returned to private business and became active in the Democratic Party, despite his family’s Republican roots. In 1932, he was appointed as Ambassador to Austria in the Roosevelt administration.”

According to the Pennsylvania Historical and Museum Commission : Earle became the leading choice for Democratic leaders – Earle’s deep family roots linked to distinguished Pennsylvanians and colonialists, his success as a businessman and war hero, and an athletic appearance appealed to voters. Earle was also known as a sportsman. He was captain of the All-Philadelphia Polo Team that won a national championship in 1930. He was also a hunter, fisherman, and a breeder of dogs.

Earle was elected to serve as the 30th Governor of Pennsylvania and held that office from January 15, 1935 until January 17, 1939.

In 1944, President Roosevelt assigned Earle to compile information on the Katyn massacre, the massacre of the Polish intelligentsia by the Soviet government. Earle’s subsequent report that the Soviet Union was guilty was suppressed by Roosevelt who was convinced that Nazi Germany was to blame.

In 1921, during a meeting at the Westminster Kennel Club, George Earle and a group of Doberman fanciers got together and formed the Doberman Pinscher Club of America. In 1922, they adopted the Standard for the breed set up by the Germans and this standard was kept under 1935 when the first American Standard was implemented and approved by the AKC.

Throughout the 1920’s and ‘30’s, the popularity of the Doberman Pinscher began to escalate in the United States and there was a heavy demand from American fanciers for German Siegers and Siegerins especially when they were proven producers. In 1921, George Earle led the way by acquiring Ch. Lord v. d Horstburg for his Red Roof Kennels along with several good German bitches. Lord was the top-winning Doberman at Westminster in 1922.

George Howard Earle III died on December 30, 1974 at the age of 84. He was married to Jacqueline Sacre of Belgium, who was his second wife, and they had a daughter and a son. The son, Ambassador Ralph Earle II, followed in his father’s footsteps with a career in politics. He was director of the Arms Control and Disarmament Agency and served as chief negotiator at the SALT II talks on nuclear disarmament on behalf of the United States.

It was through the efforts of George Howard Earle III that the DPCA was born and we are forever proud of his accomplishments in life and on our behalf. To find out more about the distinguished life of our founder, please visit the sites below.

Do NOT follow this link or you will be banned from the site!