On this page you can learn about our AKC Breed Standard, how coat color is inherited, more details about the Doberman’s mouth/teeth, and their temperament.
Official AKC Standard of the Doberman Pinscher (Adopted February 6, 1982)

The appearance is that of a dog of medium size, with a body that is square. Compactly built, muscular and powerful, for great endurance and speed. Elegant in appearance, of proud carriage, reflecting great nobility and temperament. Energetic, watchful, determined, alert, fearless, loyal and obedient.

Height at the withers: Dogs 26 to 28 inches, ideal about 27 1/2 inches; Bitches 24 to 26 inches, ideal about 25 1/2 inches. The height, measured vertically from the ground to the highest point of the withers, equaling the length measured horizontally from the forechest to the rear projection of the upper thigh. Length of head, neck and legs in proportion to length and depth of body.

Long and dry, resembling a blunt wedge in both frontal and profile views. When seen from the front, the head widens gradually toward the base of the ears in a practically unbroken line. Eyes almond shaped, moderately deep set, with vigorous, energetic expression. Iris, of uniform color, ranging from medium to darkest brown in black dogs; in reds, blues, and fawns the color of the iris blends with that of the markings, the darkest shade being preferable in every case. Ears normally cropped and carried erect. The upper attachment of the ear, when held erect, is on a level with the top of the skull. Top of skull flat, turning with slight stop to bridge of muzzle, with muzzle line extending parallel to top line of skull. Cheeks flat and muscular. Nose solid black on black dogs, dark brown on red ones, dark gray on blue ones, dark tan on fawns. Lips lying close to jaws. Jaws full and powerful, well filled under the eyes. Teeth strongly developed and white. Lower incisors upright and touching inside of upper incisors true scissors bite. 42 correctly placed teeth, 22 in the lower, 20 in the upper jaw. Distemper teeth shall not be penalized. Disqualifying Faults: Overshot more than 3/16 of an inch. Undershot more than 1/8 of an inch. Four or more missing teeth.

Neck proudly carried, well muscled and dry. Well arched, with nape of neck widening gradually toward body. Length of neck proportioned to body and head. Withers pronounced and forming the highest point of the body. Back short, firm, of sufficient width, and muscular at the loins, extending in a straight line from withers to the slightly rounded croup. Chest broad with forechest well defined. Ribs well sprung from the spine, but flattened in lower end to permit elbow clearance. Brisket reaching deep to the elbow. Belly well tucked up, extending in a curved line from the brisket. Loins wide and muscled. Hips broad and in proportion to body, breadth of hips being approximately equal to breadth of body at rib cage and shoulders. Tail docked at approximately second joint, appears to be a continuation of the spine, and is carried only slightly above the horizontal when the dog is alert.

Shoulder Blade sloping forward and downward at a 45-degree angle to the ground meets the upper arm at an angle of 90 degrees. Length of shoulder blade and upper arm are equal. Height from elbow to withers approximately equals height from ground to elbow. Legs seen from front and side, perfectly straight and parallel to each other from elbow to pastern; muscled and sinewy, with heavy bone. In normal pose and when gaiting, the elbows lie close to the brisket. Pasterns firm and almost perpendicular to the ground. Dewclaws may be removed. Feet well arched, compact, and catlike, turning neither in nor out.

The angulation of the hindquarters balances that of the forequarters. Hip Bone falls away from spinal column at an angle of about 30 degrees, producing a slightly rounded, well filled-out croup. Upper Shanks at right angles to the hip bones, are long, wide, and well muscled on both sides of thigh, with clearly defined stifles. Upper and lower shanks are of equal length. While the dog is at rest, hock to heel is perpendicular to the ground. Viewed from the rear, the legs are straight, parallel to each other, and wide enough apart to fit in with a properly built body. Dewclaws, if any, are generally removed. Cat feet as on front legs, turning neither in nor out.

Allowed Colors: Black, red, blue, and fawn (Isabella). Markings : Rust, sharply defined, appearing above each eye and on muzzle, throat and forechest, on all legs and feet, and below tail. White patch on chest, not exceeding 1/2 square inch, permissible. Disqualifying Fault : Dogs not of an allowed color.

Free, balanced and vigorous, with good reach in the forequarters and good driving power in the hindquarters. When trotting, there is strong rear-action drive. Each rear leg moves in line with the foreleg on the same side. Rear and front legs are thrown neither in nor out. Back remains strong and firm. When moving at a fast trot, a properly built dog will single-track.

Energetic, watchful, determined alert, fearless, loyal and obedient. The judge shall dismiss from the ring any shy or vicious Doberman. Shyness: A dog shall be judged fundamentally shy if, refusing to stand for examination, it shrinks away from the judge; if it fears an approach from the rear; if it shies at sudden and unusual noises to a marked degree. Viciousness: A dog that attacks or attempts to attack either the judge or its handier, is definitely vicious. An aggressive or belligerent attitude towards other dogs shall not be deemed viciousness.

The foregoing description is that of the ideal Doberman Pinscher. Any deviation from the above described dog must be penalized to the extent of the deviation.

You can view the entire illustrated standard on the Judges Education Committee website here.

This chart has been arranged by Mr. W. Donald Thompson, Middletown, Delaware, based on the studies of Iljin* and of Whitney**. The Doberman Pinscher Club of America wishes to express appreciation to Mr. Thompson for his permission to reproduce this color chart.

= Fawn (called “Isabella;” about the color range of ‘camel’s hair’ with rust
markings)

B is the factor for black; it is dominant over b, the red factor.

D is the ‘nondilution’ factor; it is dominant over the dilution factor, d.
The numbers (6.25 – 100) are percentages of each color type to be expected.

Color Inheritance in the Doberman Pinscher 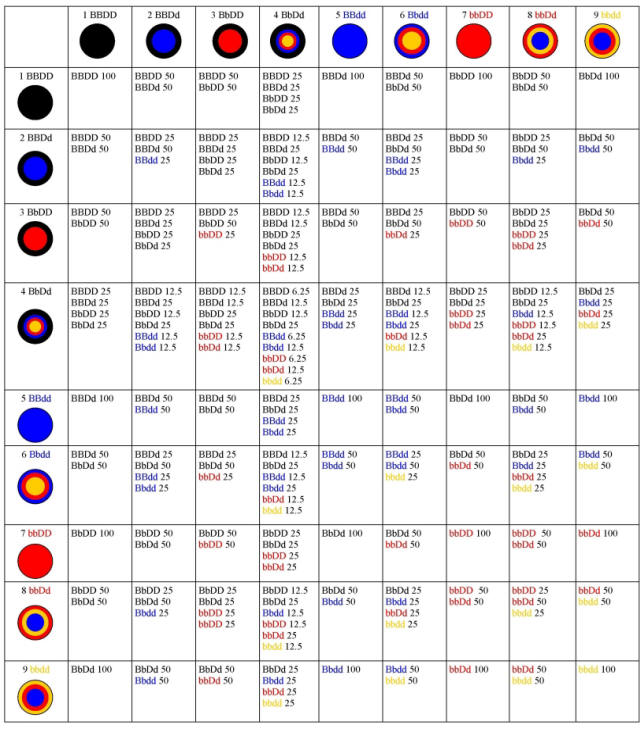 It is to be noted that the proportions of the various color combinations as listed above are theoretical, with the exceptions of those where 100% (or all) of the get are expected to be of one type. If it were possible to observe 1000 or more pups from a breeding which would theoretically produce pups of three or more genetic formulas, then the proportions noted would be very nearly those which are expected by theory.
In relatively small litters (with from 6 to 12 pups for example) the probabilities of the predicted ratios actually being observed would be very remote indeed. This chart and its contained percentages are therefore meant to serve only as a guide to color inheritance in the breeding of Dobermans.

Our Doberman Standard states that the teeth shall be “strongly developed and white” and there shall be “42 correctly placed teeth: 22 in the lower, and 20 in the upper jaw.” The location of teeth in a Doberman’s mouth is logically divided into groups. Memorizing each group will facilitate the development of a technique of rapidly observing groups at a glance, thereby precluding the necessity for actually counting the teeth, except in rare instances. The development of this technique is particularly advantageous to judges. These groups are as follows:

Twelve Incisors -There are 6 upper incisors and 6 lower incisors which comprise the bite.

Four Canines -Two fangs or canines are on either side of the incisors, top and bottom.

What is overshot? The front teeth {incisors) of the upper jaw overlap and do not touch the front teeth of the lower jaw when the mouth is closed.

What is undershot? The front teeth (incisors) of the lower jaw overlap or project beyond the front of the upper jaw when the mouth is closed. Boxers and Bulldogs are good examples of this bite.

The proper bite is a “true scissors” -lower incisors upright and touching inside of upper incisors.

At certain times during the formation of permanent teeth, pups may be ill or have to receive certain medication for diseases. Either of these can cause a yellowish discoloration and/or pitting of the permanent teeth. These distemper teeth shall not be penalized” according to the current Standard.

Below is a chart of 42 correctly placed adult teeth. 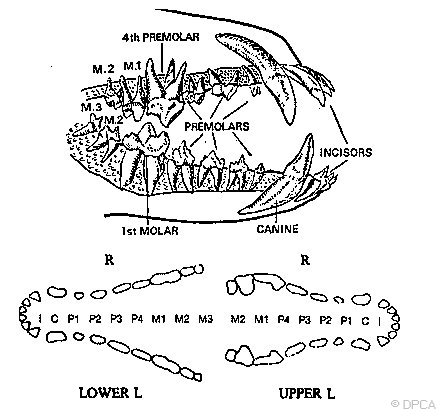 Although Doberman temperament has undergone a gradual but steady decrease in overall sharpness during recent years, today’s Doberman is still a dog that requires intelligent handling and does offer good protection for his owner, family, home, auto and business. But due to his energetic nature and super intelligence, many people do not make good owners although he isn’t nearly as difficult to own as he was in those earlier days when the Doberman earned his reputation as being the sharpest thing on four feet! The uneducated public still harbors a pronounced fear of the Doberman Pinscher, and strangely enough, this has been a lasting blessing for the breed. But how then, can the Doberman breed with such a reputation, be one of the ten most popular breeds in the United States today.

The answer is simple enough. The Doberman has always been, for the most part, extremely loyal and very trustworthy to his master to a greater extent than most other breeds. He is also a dog that becomes an important and enjoyable part of the family. He requires close association with those he loves and when this love is present, his temperament makes him a natural protector. He is trustworthy around his master’s children, friends and even company if he is treated with reasonable respect. His physical makeup such as his medium size, short hard hair and overall clean-cut trimness has always been a blueprint of the ideal house dog, but it wasn’t until his sharpness mellowed, making him easier to handle, that he could reach his present popularity.

It must not be assumed that all Dobermans have like temperament and it is wise for all prospective owners of the breed to see and become acquainted with the parents of puppies or grown dogs before any purchase is made. On the whole, present-day breeders are doing a good job of producing sound temperament in their breeding efforts. There still is a small percentage of shy, as well as vicious, Dobermans in existence but fortunately they are diminishing. On this point, you need the help of a reliable breeder or breed authority to help you make the best selection for your own particular situation. Once you have had the pleasure of owning a Doberman Pinscher of correct breed temperament, you can’t help but be spoiled for life.

We are pleased that you are considering joining the ranks of many happy Doberman owners, and would like to offer you a few tips in selecting not only the right puppy. but the right breeder, which is the most important step you will take. While we cannot do this for you, we can offer some advice to perhaps get you off to a good start.

If at all possible. do go and pick up the puppy yourself, even if it means a long drive. This will not only enable you to meet the breeder of your puppy. but also see the dam and the conditions under which the litter was raised. Of course, make an appointment. as breeders are generally quite busy and have many visitors.