The Doberman Pinscher is a compilation of many breeds. The following is a list of breeds thought to be the predecessors of the modern Doberman. These animals contributed to the Doberman over a period of 35 years. 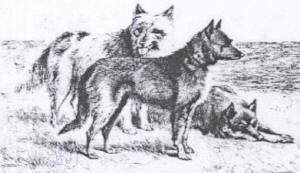 These shepherd dogs were crossed with Pinschers to produce a Thuringer type butcher dog that was common in the area. In the early part of the 1870’s, it was told, Herr Dobermann crossed the progeny of a blue-grey Pinscher type bitch and a black and tan butchers dog, with a German Pinscher. This may be the first indication of the breeds used in the development of our breed.

The Butcher Dog, who was the ancestor of the Rottweiller as well as the Doberman, shows very strongly in this dog, 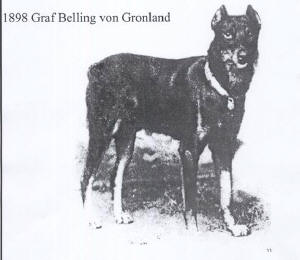 At one of the first shows, in 1899, there were 12 Dobermans including the winner, Graf Belling, in a ring. It was said that those 12 dogs were so similar to Rottweilers that you could not tell the difference between a bad Rottweiler or a good Doberman, apart from the cropped ears!

The Beauceron : Their link to Dobermans can be made in that the Beauceron was brought to Prussia in 1806 with Napoleon’s army. The Beauceron, shown below at the turn of the century, were known to have interbred with the local dogs. 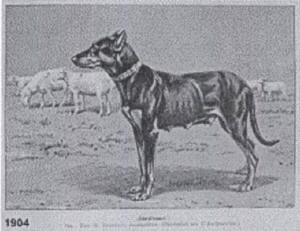 The German Pinscher:
The legacy of the German Pinscher addition is very little. It may be deemed that this addition was not a goal, but a stepping stone, and not as harmful as a breed with a more distinct type than the Doberman, would have been. The dilution of German Pinscher blood has been complete many years ago as this was not the direction the originators of the breed were wanting to go. The head, size, and body shape were not in our blueprint, and so were eliminated over time with selection.

In 1939, Herr Gruenig, (in his book, The Doberman Pinscher, 1939), said,” The German Pinscher contributed little to the head type. The Rottweiler, or old Butcher’s dog, sporting dogs, all added traits like heavy jowls, and thick skulls in which earlier specimens bear testimony.

In 1902, a Gordon Setter was crossed in, with the purpose of improving the coat color. As the short coat proved dominate, no harm was immediately seen. The color of the coat was not improved, but generations later, the long coat would show up, when the genes inadvertently were doubled.

This is a picture of 2 early dogs, circa 1899. The size of these early dogs were around 25 inches for males. The first standard was written in 1899, upon the formation of the first Doberman Club. As soon as this blueprint was set down, the breed changed rapidly into the dog we know today. 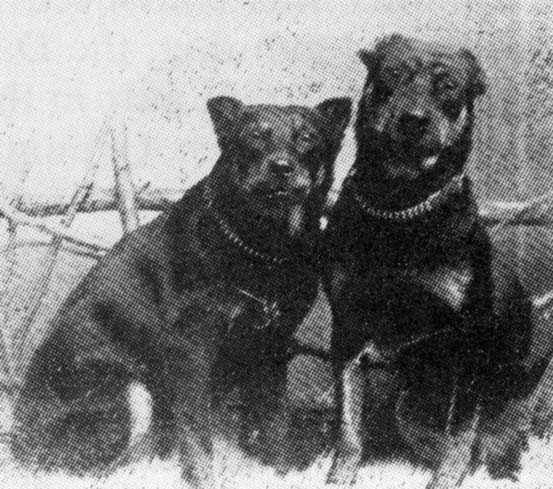 At the turn of the century , the Manchester Terrier was added. As the German Pinscher, Manchester Terrier, Rottweiler, and Beauceron are very similar in look, these crosses did not change the appearance of the turn of the century Doberman, as much as it enhanced it. Phillip Grunig stated in 1939, of the dogs of that period, “Under these circumstances it would be difficult to distinguish a coarse Doberman from a refined Rottweiler. It would be equally difficult to distinguish a small and delicate Doberman from a coarse German Pinscher, etc.”

The Doberman of today owes his present form to the many crosses done in the early years. Below is a picture of Fedor V. Arpath, born in 1906. This dog is 1/4 Manchester Terrier. 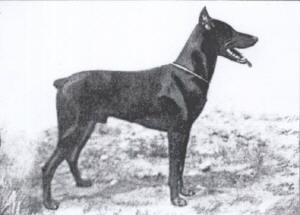 The Manchester was added to get the smooth, short coat that we desired. The hair is also very thick, with many hairs per square inch.

A black Greyhound male from England was the sire of a bitch named Stella, a stud book entry in 1908.

Doberman Pinscher Club Of America was formed in 1921, when the fanciers attending the Westminster show decided to band together to promote their then relatively unknown breed. The official German standard was adopted by the DPCA on Feb. 13, 1922.

Breeders, remember, you have been given, by your predecessors, the torch and a blueprint to follow. As the breed is only a little over 100 years old, it could be set back seriously in only a few generations of short-sightedness.

Judges must recognize that although our breed has many breeds in it’s makeup, it must not look like any one of them. You must5 see those breeds only as threads in the fabric. The making of the Doberman Pinscher is not over, but we hope you have enjoyed the story of the first one hundred years. 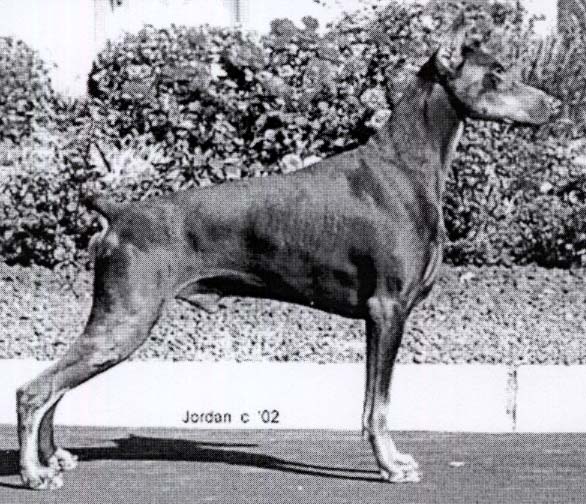