In Favor Of Better Dogs

When it comes to solving problems, two heads are better than one. A synergy is produced each time there are interactions that involve the sharing and exchanging of ideas. When breeders and judges gather to discuss their common interests, they create this synergy through their combined talents, energies and knowledge.

The effectiveness of these efforts, when directed at problem solving, is legendary. Historically, there have been many breeders and judges groups that have relied on these activities to promote knowledge about the sport in order to solve breed problems. They have accomplished both through a little noticed effort that calls for agreement on the interpretation and implementation of breed standards. For example, most breeders pay close attention to the dogs that win. They also notice what these dogs produce, or fail to produce. This is one of the key mechanisms that allows them to identify the better breeding animals, their best offspring and the pedigrees that produced them. It is no secret that the winners will be bred more often than the losers. This explains why so many of the better pedigrees include the names of popular stud dogs and champions. It also demonstrates that the time they invest in these efforts is well spent. This scenario, when repeated, improves the dogs owned by the successful breeders.

Judges and their associations play an important role in the process of making breed improvements because their meetings produce a synergy that is beneficial to the breeding of the better dogs. When enough judges select the same dog as their winner, that dog becomes popular and the breeders begin to use it in their breeding program. Experienced judges understand this phenomena and make their judgements and evaluations accordingly. This is why interpreting the breed standard goes beyond using the wicket and scales, withholding, excusing and disqualifying dogs whose traits drift from the standard. It also goes hand in hand with finding dogs that come closest to the standard. Those who manage their assignments with these ideas in mind become known as judges who are interested in promoting the well-being of the breeds they judge. Judges have a special responsibility to the breeders as they sort through the potential breeding stock in their ring. I can recall listening to a group of breeder-judges arguing about the best way to eliminate missing teeth. In this case, the breed standard called for full dentition. Unfortunately, many of the better dogs often were found to have missing teeth. After several meetings, the judges agreed to not let any dog win the points if it had missing teeth unless no other dog of merit was entered. Ten years later, what had been a serious problem in the breed became only a memory.

A common mistake that is sometimes made by both the judges and the breeders is to place undue emphasis on one trait. Those who do soon learn that in time the overall quality of the pups being produced will begin to drift toward the breed average and these offspring will begin to show all of the variations found in their breed.

History shows that there are many ways to make improvements and correct faults in a breed. Some breed clubs have joined together with their judges in order to focus on specific areas that need correction or improvement. How they go about developing these relationships usually depends on the importance they give to their problems. For example, sound temperament is a required trait in every breed and it is a characteristic that always merits attention. To this end, some parent clubs have initiated their own breeder-judge partnerships in order to improve and support this important trait. One club has developed an “in-ring temperament test” for use at all-breed and specialty shows. Others are developing special temperament tests for use at their trials or at free-standing events.

The AKC has also added emphasis to this trait by directing its judges to excuse or disqualify dogs whose temperament is undesirable. But what is acceptable in one country can be unacceptable in another. For example, in many European and Latin American countries, the Brazilian national dog called the Fila Brasileiro oftentimes intrigues spectators because of its size and temperament. It ranges from 90 to 100 pounds and stands 24-29 inches in height. Filas are thought to have come from a combination of breeds. The interpretation given its breed standard suggests that aggression towards strangers and other dogs is not uncommon. One of its valued characteristics is to have skin so supple and loose that it can make a complete turn within its skin and attack a predator or human who attempts to hold or restrain it. The Filas are popular because of their fearlessness, which is coveted by owners looking for personal or property protection, as well as loyalty and affection. It is not popular in the United States, Canada and elsewhere because of these breed characteristics.

Over the years, the emphasis that has been given to temperament has changed. This is evidenced by the way in which it has been reported. In the past, the term “dirty dozen” was a phrase used to describe the twelve breeds that had the highest number of dogs excused and disqualified from the ring in a calendar year. It produced useful results by showing which breeds were making progress and it kept the breeders and the breed clubs on their toes. Unfortunately, the practice of publishing this list has been discontinued. Table 1 is a more recent variation of that idea. The data presented is in the aggregate, but it shows the number of dogs excused and disqualified from the ring for a sixteen-year period. It is interesting to note that while the number of shows and entries have steadily increased over this period, the number of dogs with bad behavior has remained relatively flat. For example, entries increased from 1,922,267 in 2001 to 1,933,596 in 2002. These statistics demonstrate the value of how a breeder-judge relationship can work to make an improvement.

There are many kinds of information that can be used to evaluate progress. Who wins and who loses, coupled with what they produce, continues to stand tall among the factors considered of most importance. When information about what a breeder is able to produce becomes available, it spreads quickly via word of mouth and the Internet. For example, dogs that lose and those that do not produce quality offspring quickly become known as the dogs to avoid. While this process works, there is still room for improvement. Another indicator that has served a useful purpose involves the number of pups breeders sell on spay/neuter contracts and those sold on limited registrations. Both are good indicators of low quality. Reports about the breeders who sell pu
ps this way have been isolated and scattered until recently. Table 2 focuses attention on these breeders and it shows why there is a need for more breeder-judge partnerships. Notice the steady upward trend over this eight-year period. Unfortunately, the number of pups being sold on limited registrations continues to grow along with its unintended consequences for many breeds and their clubs. 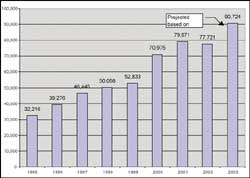 The data presented in Table 1 serve as a good indicator of why more attention should be given to the education of breeders and judges. Unfortunately, the solutions to the problem of poor quality can not be addressed by studying charts or analyzing tables. The solution must come from those who participate in the sport. In this case, the decision-makers are the breeders and the judges. As more judges and their associations begin to partner with breed clubs, more improvements can be expected. The combined efforts of both groups, when focused at specific problems, can help to make improvements sooner rather than later.

Many clubs have found that hosting annual meetings of their judges and breeders during their national specialty show is an effective way to identify, prioritize and focus on the problems that need attention. Experience also shows that when decisions are made about the problems to be addressed they should be widely distributed on club websites and in their club newsletters. The amount of success one can expect will depend on the quality of the educational programs coupled with the depth and frequency of their occurrences.

If you would care to express your ideas on this subject, forward them in care of the editor at K9CHRON@aol.com.