Life in America is so much different today than 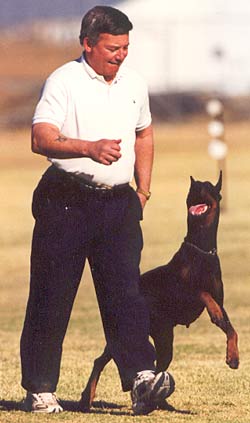 before 9/11/01. We now live in a world filled with hate and realize there are many who want to destroy our way of life and take away our freedom. As a result the demand for working dogs and the need for home security is increasing daily. The AKC is changing their position on “Working Dog events” and the DPCA and the GSDA have been given permission at our nationals to demonstrate our dogs working ability to serve the public needs.

In these times we also see ever-increasing anti-dog legislation and public outcry over dog attacks. Now, more than ever before, we as judges must make ourselves accountable, not only to the breed or the AKC, but to the public in general for the proper judging of poor quality temperament presented to us in the ring! Judges must take this responsibility seriously and fully understand what our standard demands of our dog’s temperament and character at least as much as they do about their structure. If not, the politicians, sick and tired of having dog-attack complaints thrown in their laps, will make executive decisions more discriminatory and far reaching than we could even begin to contemplate regarding the nature of their severity. A small sampling is American Airlines recent ban to fly Dobermans.

The breed standard describes the desirable characteristic hallmarks of an ideal temperament. Namely it is PROUD, NOBLE, ENERGETIC, WATCHFUL, DETERMINED, ALERT, FEARLESS, LOYAL AND OBEDIENT. Descriptive words that should give anyone a pretty clear picture of how our Dobermans should look and behave at any given time. As judges we must appreciate and REWARD sound temperament when found and just as importantly RECOGNIZE and PENALIZE faulty temperament in our rings. A judge that overlooks shyness, fearfulness, unprovoked or inappropriate aggression, avoidance, or cowering in a Doberman fails not only in their responsibility to the breed, but the society we all live in. The more shy and fearful a dog is, the more likely to be easily stressed by things in its environment, and the more unpredictable and dangerous its behavior.

Correct temperament determines the ability of a Doberman to perform the function for which it was bred. If we expect to preserve and protect this breed as a functional entity in this modern world, it’s important to understand and appreciate the purpose of that function. It is function that determines the purebred dog’s most important characteristic-breed type. No function, no Type-no Type, no breed.

To be functional a wheel must look round. However, the terms of its function will dictate its dimensions. A Ferrari wheel is certainly as round as a tractor tire, yet both are built quite different due to their opposing functions. Equally as important is what’s under a Ferrari’s hood and as relevant to its functional type as what its chassis looks like! Different function, different look! If Dobermans lose their ability to function as protectors, we really must ask ourselves “what breed ARE we judging when we are out there?

To properly judge and breed better Dobermans, understanding Doberman function is central to an ability to evaluate the breed properly. Because a dog stands for the examination and puts up its ears is not an indicator of correct temperament. A Doberman must be able to meet your eyes without nervousness or inhibition. To act as a companion, family guardian, and personal protector the characteristics displayed in the ring MUST be an image of boldness and firmness!

We all know that temperament is not black or white. To competently evaluate the whole dog, in context to single elements of its behavior, requires some knowledge and experience. The dog that leans on its handler or owner may be insecure or it may be pushing for a dominant position to gain strength or the upper hand in the situation. The dog that jumps up on you may be giving you a happy, excited greeting or it can be a dominant show of force. We must understand the whole dog and never take out of context any single element of its behavior. What is a dominant behavior in one dog may be submissive in another. When decisions are to be made within a few short minutes, it is neither possible nor wise for judges to speculate how much influence nature or nurture might have played in forming the behavior of the dog before him. We can only judge what we see in the ring on that day and compare that behavior to the ideal described in the standard!

Demanding strict adherence to the breed standard’s practical requirements is necessary when breeding for or judging sound temperament. Reinforcing these in all competitive venues is a responsibility, a cornerstone to protecting the purpose, and thus the viability of the breed’s future. For that reason, adherence to typical breed temperament and character traits, as described in our standard, must be considered the overriding guideline we measure our dogs against.

Temperament can be described as both the physical and mental reaction to any stimulus. It includes the attitude of the dog and what that attitude expresses. We normally think of behavior as temperament and for purposes of this discussion we need not debate the scientific definition. When we train or condition our dogs to stimuli we are modifying its natural behavior. What you see is not the natural temperament of the dog but a learned behavior. Temperament is both instinctive and learned behavior combined. One extreme is a dog afraid, nervous, worried, always showing panic behavior and will continue to show fear of the same stimuli after repeated exposure to the same stimuli. The other extreme is the very stable “bombproof” dog, with a strong nervous system and not afraid of the devil himself. This could be described as the “fearless dog.”

Hallmarks of typical breed temperament can show considerably different from breed to breed, which is a factor directly related to the function of that breed. Dobermans are first and foremost “protection” dogs and should not be penalized for behaving in accordance to the purposes for which they were bred. Having the courage and determination to protect does not mean to “attack.” On the other hand, a docile, laid back, lethargic, non-interested Doberman might be a good family pet, but does not meet the benchmark standards for ideal Doberman temperament. Just as we expect a Doberman behaving with erratic nervousness or with unprovoked aggression is not a desirable breed representative either.

As judges, we only have a few minutes to evaluate the qualities of each dog. This requires judges to “read or interpret” the reactions of the dog to external and internal stimuli. In relation to character and temperament, it is to our advantage that dogs cannot pretend. Signals such as darting eyes, nervous licking of the lips, trembling, hair raised, cowering, avoidance on approach, snappishness, a need of handler support or restraint, anxious or worried expressions and similar signs are all symptoms of nervousness that require further attention. When judges suspect a dog is unsure they should not let these concerns pass on face value. If necessary we can apply subtle pressures that will enable us to proof our suspicions. We must also keep in mind to properly evaluate temperament the dog must be an adult, as puppies and young dogs lack the necessary maturity to make a definitive evaluation of their temperament. However we must assume a normal, well-socialized puppy should not behave fearfully or aggressively towards a stranger. Puppies that lack proper socialization have no place in a breed ring, as the ring should never be a place for a bad experience!

There are many elements of temperament not mentioned in our standard. Stability, confidence, courage, sharpness, hardness, sociability, sensitivity and combativeness to name a few. Don’t confuse or interchange temperament with character. They are not the same. Character is the overall blueprint of behavior, the total dog. What and how a dog thinks of itself; it’s self-esteem, reflecting that undeniable arrogance of a proud and noble Doberman. Temperament is part of a dog’s character.

A discussion of temperament must include “drives” whether instinctive or acquired and developed through training. The most important drive is Social Drive because it is most necessary for survival. The desire to be with the pack, both human and canine, means isolation creates behavior problems. They include destructive or overly dependent actions. Prey drive-the desire to chase the cat or ball. The stronger the drive the harder the chase. Defence Drive-the dog’s desire to protect and defend itself. Quick to react to a threat or a challenge. Dominance Drive-the desire to control the action and be the leader of the pack. Poor imprinting can cause improper development of this drive. It is important in the young dog to establish the proper pack order. Territorial Drive, Fighting Drive, Protection Drive, Submission Drive are all drives that are components of temperament. Temperament is a total concept requiring an understanding of the dog’s relation to its environment and what it has learned through its experiences.

So much can be seen when looking in the eyes of a Doberman. The eyes must be clear and have a confident determined look. A friendly judge will receive a friendly response with a sparkle of intelligence. A hard stare may get the sort of response that tells the judge not to push his luck! Watch the body language and see if the dog holds it ground boldly seems aware of things around it (not focused on one object to mask a fear of awareness of its surroundings). Be aware of the dog’s reaction to the crowd when entering the ring – is it confident or nervous? Does clapping or other loud noises bother it? How does it react to flapping loose clothes or signs, large hats, etc? When being examined does it cringe and need the support of the handler? When standing alone does it stand its ground, hold its head high and obey the handlers command to stand or does it sidle away to avoid the judge’s approach?

Dogs with good temperament have stable, confident attitudes. Dobermans by nature are not everyone’s best friend. The aloof dog with a degree of suspicion does not reflect a faulty temperament.

Good temperament is not an accident. It requires breeders to do their homework. Research the lines of the dogs being bred to insure they have been tested for stability, confidence, strong drives, body and sound sensitivity, hardness, and good health. Health also has an effect on temperament. Good health as well as temperament must be tested. If you don’t test you don’t know, your guessing!

Learned behavior is extremely important in a well-adjusted dog. It begins with that portion which is imprinted at a very young age and nurtured through life. What you imprint in the first 8-20 weeks of your dogs life will have a lasting effect on the temperament. In the show ring Judges expect our dogs to accept normal, everyday life experiences without showing fear, aggression, or anxiety over such things as eye contact, walking directly up to the dog, or the hands on exam during judging. Poor temperament is self-evident and a judge doesn’t have to be a rocket scientist to recognize unwanted behavior when he sees it. The real question is, what does he do about it? We MUST do as the standard demands and insist the dog is in compliance with the elements described in the standard. No mater how beautiful the structure, a Doberman with a poor temperament is a poor Doberman and MUST BE immediately eliminated from consideration. Rewarding dogs with poor or questionable temperament sends the wrong message to breeders who will come back with more dogs of the same or even worst quality.

If we really want to preserve and protect the Doberman, we must continually safeguard the characteristics essential in a family companion and protector. This is the joint responsibility of all who love the Doberman and what the breed stands for!