The following pictures and comments are intended ONLY to clarify how banding of Doberman puppy tails are done by Keith & Judy Pritchard at Skylocke Dobermans. This page or procedure is NOT intended to put down anyone else’s methods or beliefs. Judy has been asked NUMEROUS times how the banding is done because people have seen the end results of her finished tails and have asked how they do it. On this page, Judy will “describe” in pictures how it’s done and will show the results as the actual banding progresses. 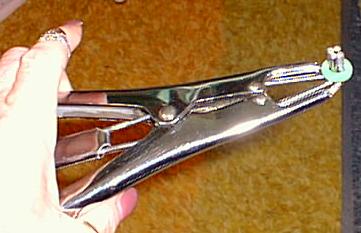 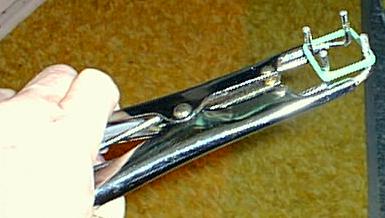 This is an ELASTRATOR tool.
(Available at almost any feed store.)

It’s primary use is to DOCK lambs and to castrate young farm animals by placing the rubber ring over their testicles while they are still very immature. Doberman puppy tails are usually done at about day 7-10, depending on the size of the tail itself. It must be big enough for the rubber ring to do the job for which it is intended, and yet the tails cannot be over-large, or the pressure will be uncomfortable for the puppy. We prefer to NOT have any discomfort at all if we can manage it.

As you can see in the photos above, the little rubber “donut” shaped ring is placed over the prongs on the tool and then the tool is squeezed to open the prongs, spreading the rubber ring open. This open area is slipped up over the puppy’s tail while at the same time, the skin on the tail is slightly pulled back toward the body. The ring is placed just inside the rust color and then the tool is gently allowed to close the ring over the tail. The tool is then pulled away and the ring easily “rolls” into the space between the joints in the tail.

All the puppy feels if this is done properly is a slight momentary amount of pressure on his tail. The blood supply to the end of the tail is immediately cut off and the tail begins to shrink and waste away. Our tails usually begin to drop off anywhere from day three to day five. The black pup I’m using for an illustration below lost the tail on day three. 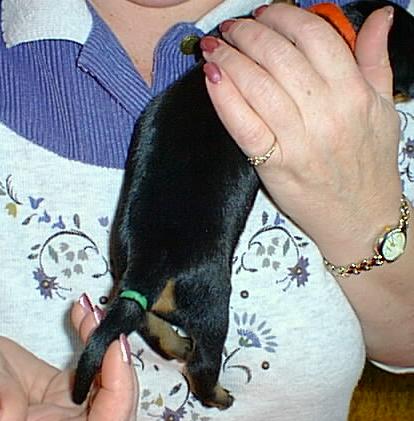 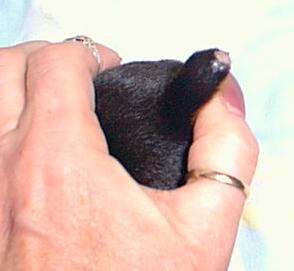 Tail dropped off on day 10 – this is JUST after it came off.

At this point, you generously apply some Neosporin and some antiseptic powder. There is no feeling in the spot on the end of the tail……the pup is oblivious to it. The Neosporin wards off any possible infection and the powder begins the drying and shrinking process.

Photo of how the tails appear when they fall off. (If you’re squeamish, don’t click) 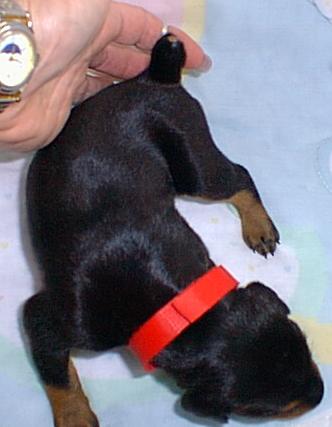 A domed-shape scab will form within a day or so.
This must be removed once it begins to pull away from the edge of the tail tip (no feeling to the puppy)

Once removed, by just “peeling” it away,
it will leave the appearance of a raw area.

Once this initial dome-shaped scab is removed, the tail will instantly begin to heal and close up at the tip.

If you neglect to remove this first scab, you will NOT get a nice tail. What you WILL get is a gooey mess under the scab and the tip’s REFUSAL to heal properly or quickly. Trust me…..remove that scab. 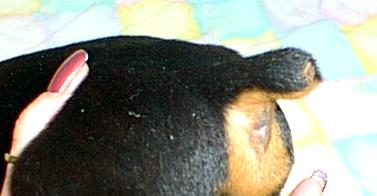 Same Puppy – 11 days after the initial banding was done. First scab has been removed, second is shrinking and drawing the hair and skin into a tiny dot on the end of the tail.

If you look closely, you will see a teensie little depression in the center of the tip of the tail. This is where everything is being drawn toward.

The end result is an attractive, “muffin-shaped” tail……not a pointed one.

Healing nicely, even though it still is not completely covered over.
Banded tails do not heal and cover as quickly as docking,
but it’s just so much easier on both puppy and breeder.

It’s actually a very short time in the life of a puppy.
By cropping time, the tails will look quite nice.
Any “cosmetics” can be done by the vet at cropping.

THIS IS WHY WE BAND AT SKYLOCKE DOBERMANS.

It’s not for everyone….and if it’s done improperly, it can damage the pup. So… if you truly want to band your babies, do it carefully…..and remember: Too long is better than too short. Long can be fixed.

I have seen a variety of Doberman tails in my life….some docked by a vet, some at home….some banded during the very first few days of life.

I have to say that the worst ones were the ones vet-docked and banded too early. I’ve known breeders to wind elastic (rubber) bands around the tails of puppies at 2-3 days old. They ended up with really sad looking tails that were pointed and ugly. I’ve also seen vet-docked tails that were seriously ugly and bald.

As I said above…..any necessary tail cosmetics can b
e taken care of easily at cropping time…..IF the tail is left long enough.