It is specifically stated that the coat is smooth-haired, short, hard thick and close lying.  Anything other than what is listed is a deviation.  Does the standard address cowlicks?  Obviously it does.  The coat should look shiny and look healthy.  It should not be thin, sparse or brittle.

COLOR AND MARKINGS
Allowed Colors: Black, red, blue, and fawn (Isabella).  Markings: Rust, sharply, appearing above each eye and on muzzle, throat and forechest, on all legs and feet, and below tail.  White patch on chest, not exceeding ½ square inch, permissible.  Disqualifying Fault: Dogs not of an allowed color.

Dobermans come in four allowed colors– black, red (various shades of reddish brown), blue (bluish gray), fawn (beige).  Blue is a dilution of black and fawn is a dilution of red.  The black Doberman has the most hair per square inch, thus the thickest coat.  A fawn has the least hair per square inch, so usually the thinnest coat.  Expect the same of all colors in terms of coat and overall quality.  Many fawns tend to have lighter color hair on their heads.  They should all have dark eyes and good coats, with rust markings.  The markings are to be sharply defined — which means clearly distinguishable from the base color of the dog.  Sharply defined dark rust markings may be harder to distinguish because of less contrast between the base color and the rust, but should never be faulted!  Markings are defined as rust, not tan!  White hairs on the chest or a small white patch is permitted up to ½” square, approximately the size of a dime.  Thus, the standard states that the white patch is not a deviation unless the size is large than a dime. 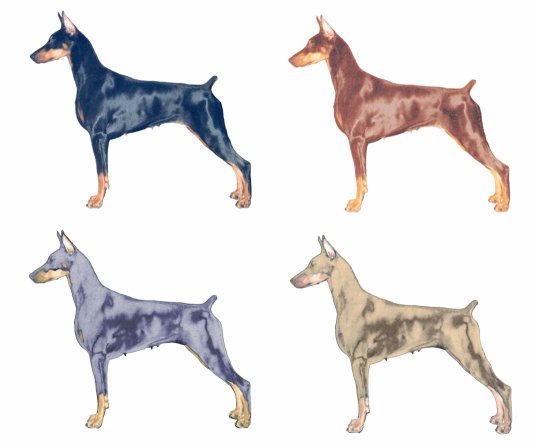 Click the following links to read more articles in  the “Dobermans in Detail” series: